← I Didn’t Cry at the TRC
Rwanda: The Forgotten Victims →

My time at the Truth & Reconciliation Commission (TRC) was one filled with strong Aboriginal women. I loved every minute I got to spend with them, especially one woman in particular – Leading Elder of the All Native Circle Conference of The United Church of Canada, Lorna Standingready. 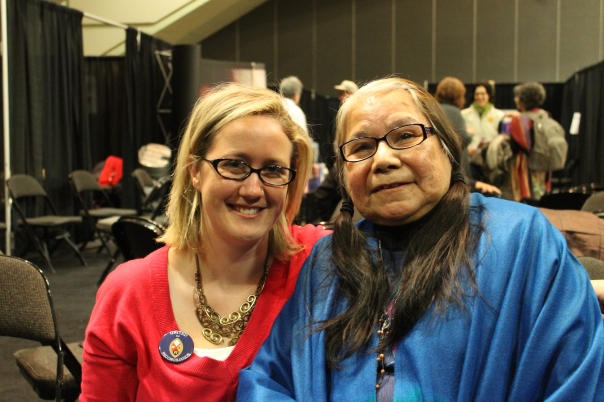 Me with Leading Elder Lorna Standingready

Lorna is a residential school survivor. She spent 10 years in three separate residential schools – Anglican, United, and Presbyterian. On the first day of the TRC, Thursday, Executive Minister of the Aboriginal Ministries Circle, Maggie McLeod, interviewed her after the opening ceremony:

Lorna spent a lot of time at the archives section of the Shaw Centre. The four main churches who ran residential schools – Catholic, Anglican, United, and Presbyterian – had archival photos of their schools on display and in binders for survivors, and others, to look through. 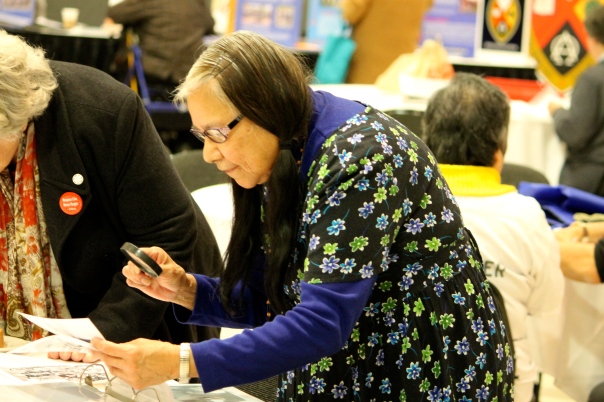 Lorna found several photos of herself, and her sister, in those files

Here’s the photo that Lorna is referring to. She’s the one second from the right, in the front row. This is at Birtle Residential School, run by the Presbyterian Church of Canada. 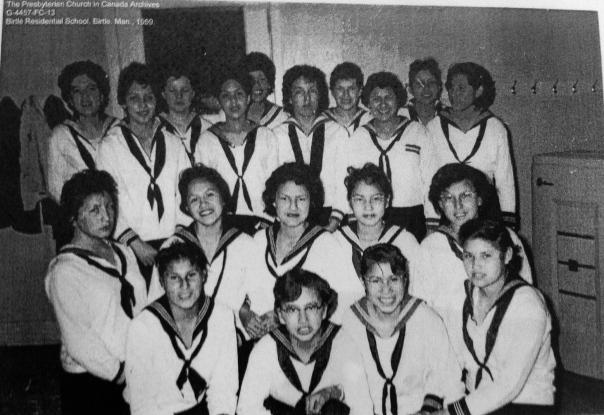 On the Friday, March 28, a United Church delegation consisting of former Moderator Bill Phipps, current Moderator Gary Paterson, and Maggie McLeod, supported by elder Ray Jones (Chair, Aboriginal Ministries Council) and Lorna herself, made a statement to the TRC. After the statement, Lorna shared her views on it:

Later that day, she and General Secretary Nora Sanders had a conversation about it:

Lorna  was asked to share her story during the Churches Listening Circle. This circle happened each day of the TRC, and was a space for survivors and church officials to sit together, with survivors telling their stories directly to church officials, and the officials responding at the end. There was also an opportunity for survivors to privately speak with a church official of their choice, and to receive a personal apology.

Here is her story, in her own words 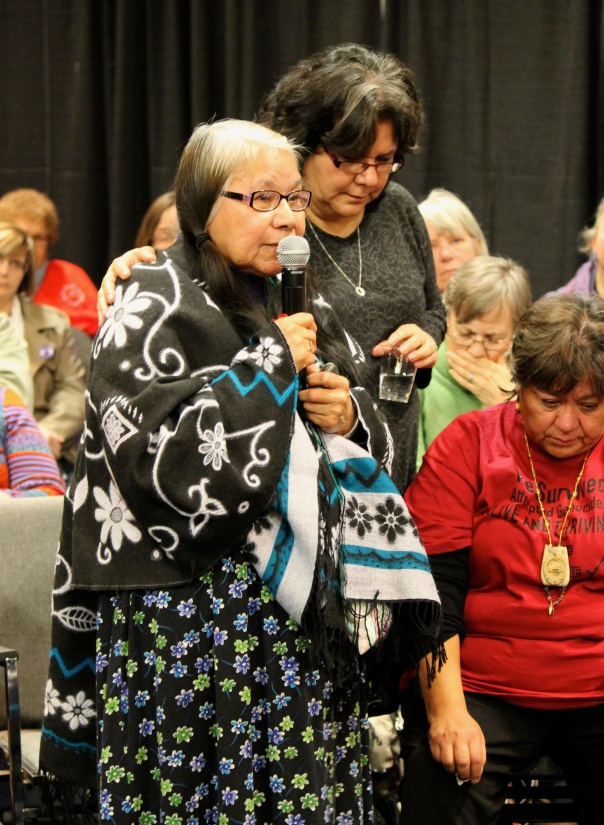 Cheryl Jourdain, speaker of ANCC, supports Lorna as she tells her story

It was difficult to hear. But I can only imagine how difficult it was to share, and for that I am so grateful to the incredibly brave and strong woman that is Lorna Standingready. Not only did she relive the emotional trauma she endured, but she also had the strength to stand behind the next survivor who was having a difficult time getting the words out, holding her and telling her that “Kokum’s (grandmother) here.” 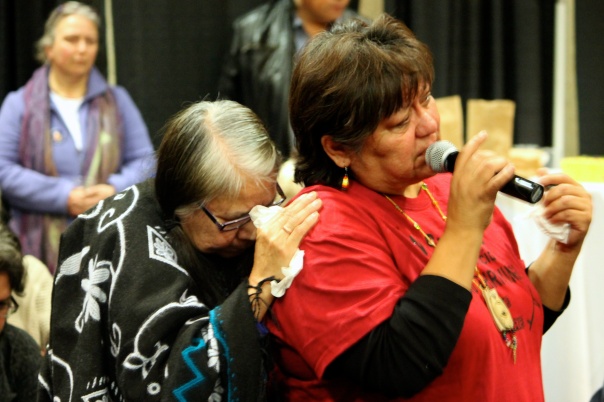 Lorna speaks about her experience sharing her story here:

Lorna also wanted to do a short recap of her experience at the TRC in Edmonton:

This is the photo she refers to in the video – that’s Lorna playing the piano. 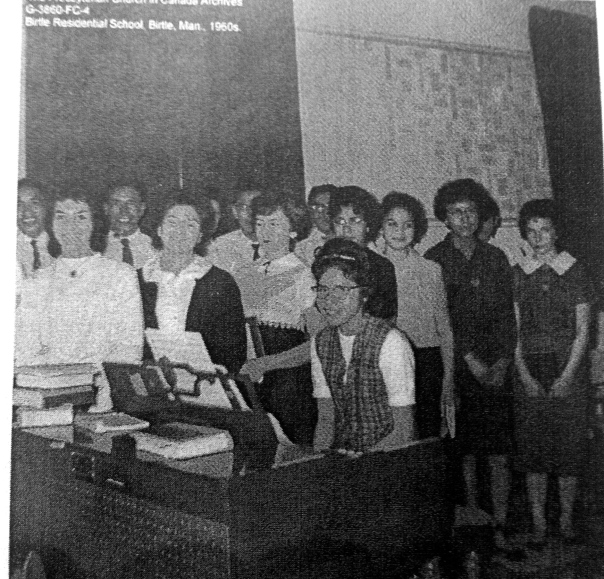 The interesting thing is, earlier I was supposed to interview Lorna. I’d asked her previously if she wanted to tell her story and have me record it. She said she did, so long as she wasn’t rushed.

This was a common sentiment during the TRC, survivors feeling rushed and comparing the TRC process with the residential school system, where they were constricted in rigid timelines (I’m still thinking about this, and hope to devote an entire blog post to it). I told Lorna we could take as long as she wanted, and so we planned to meet in the Survivors Lounge to film an interview, giving ourselves at least an hour.

But then she was asked to share in the Churches Learning Circle, so we didn’t get to do our in-depth interview. In the end, it worked out better. Lorna was able to give witness in public, to a large group of people. I was able to record it and, with her permission, share it on Youtube, where even more people could hear it.

There were other things that struck me as I was working throughout the event, that I set aside or jotted down as a note to myself to come back to and reflect on later.

One was the statement given on behalf of the United Church. It was a good, strong statement, but not one that I wholly agreed with. For starters, the two white men on the 3-person delegation spoke longer than they perhaps should have, leading Commissioner Marie Wilson to interrupt Maggie, the only woman and only Aboriginal person on the delegation, at the beginning of her statement, telling her to hurry up as time was running out.

The optics were not good.

Also, part of the statement said that the United Church would include Aboriginal peoples “in all decisions that affect them.” When I heard that, my ears perked up and I wrote the statement down on my iPhone. It just seemed really patriarchal and colonial, not to mention that it wreaked of the whole “women should only be concerned with women’s issues” idea.

Yes, I’m critical of my church. Perhaps overly critical. The United Church was the first church to apologize to Aboriginal peoples, in 1986 (see this timeline regarding residential schools). It is trying to make amends. It apologized for its role in the residential schools in 1998, and pushed the Canadian government to apologize as well, which it finally did in 2008. I heard from other people at the TRC who said they wished their churches could deliver a statement as strong and powerful as the one the United Church gave. But while the United Church is trying to live out those apologies, it isn’t there yet.

1986 was the year I was born; the United Church has been working towards right relations for as long as I’ve been alive, yet those apologies have still not been accepted by the Aboriginal population of the United Church, though they have been acknowledged. (This too continues to stay with me, and I’m thinking about a separate blog post to expand on it.)

Lorna is a very grandmothery, maternal figure. She reminds me of my grandmother, though Lorna’s about 30 years younger. My grandmother died nearly 10 years ago, in 2004, the week before I turned 18. She would’ve been 100 years old this past November. I was with her when she died, along with most of my immediate family. I remember it vividly. Holding her clammy hand, thinking I felt her squeeze my own even though she had gone into a coma a few hours earlier. The death rattle.

My grandmother, Nanny as I called her, was like Lorna in stature and strength. She was a small woman, much smaller than the 5 foot 10.5 inches I would grow to be, but I always felt like a child when I was with her, safe and secure. And she was feisty! She’d tell it like it is, just like Lorna does. She’d talk about the Black & Tans in Ireland and the things that they did. I knew that she and her family, and others in rural Co. Cork and elsewhere, were often not allowed to speak their language, Irish Gaelic, in school or outside the house. But she tried to teach me a bit of the language, and I savoured those teaching moments, even as a young child. Today, I can still say things like “Thank you,” “How are you?” etc, but I’m nowhere near reclaiming the language the way many of my relatives who still live in the Gaeltacht regions of Ireland are.

I’m not trying to equate the experience of Aboriginal people with that of the Celtic population, but stories close to my heart help me to better understand the truth-telling of other peoples. I know that some have called the Celts the indigenous peoples of Europe. Even though my ancestors were not forcibly taken from their families and sent to schools where they were abused and beaten for speaking their language, language was still lost in Ireland; names were anglicized. This isn’t just the case with the Irish, but with many different groups both here in immigrant communities in Canada and around the world. It’s something in common that could build a bridge towards solidarity, especially among those people who don’t know much about the residential schools or see this whole thing as an “Indian problem.” Finding personal connections is the first step in recognizing the more systematic and severe experience of Aboriginal peoples here in North America. We shouldn’t only care because something similar happened to our own peoples; we should care because this horrible, horrible Canadian legacy happened to other human beings.

UPDATE: 10 days after the TRC ended in Edmonton, Lorna was in Toronto and we were able to film her speaking with Rev. Maggie McLeod about the importance of Aboriginal Women’s leadership:

Posted on April 4, 2014, in Truth and Reconciliation Commission. Bookmark the permalink. 1 Comment.

← I Didn’t Cry at the TRC
Rwanda: The Forgotten Victims →