A Different Kind of Occupy

On Friday, Caroline and I visited The United Church of Canada’s partner, Surplus People Project (SPP). Their office is located close to the B&B where we stayed, so first Herschelle Milford, the Executive Director, picked us up and brought us to the office. Katherine Zavala from International Development Exchange (IDEX) based in San Francisco also joined us, as IDEX recently made a grant to SPP and were there to do a site visit. 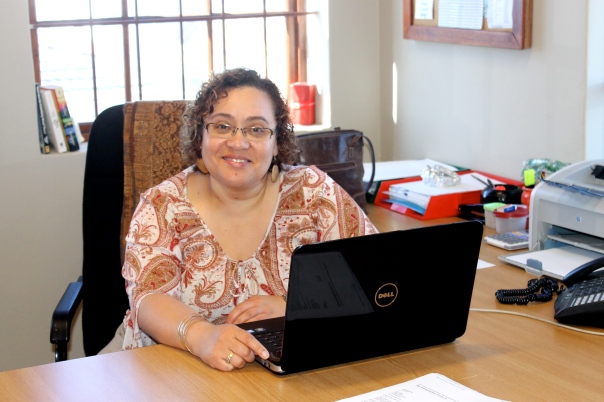 The office was very nice, with an amazing view of Table Mountain. We met a few of those who work for SPP, and then Ricado Jacobs (also with SPP) arrived to take us on our exposure visit up the Cape, to meet some of the farmers that SPP work with. Ricado told us that 42% of South Africans are food insecure, and the majority of these are women. SPP does both advocacy and practical assistance for farmers in this situation. They don’t necessarily have a relationship with individual farms, but they more engage with them and advocate on their behalf over a specific issue, such as water.

Proof I was there!

First, Ricado took us to Citrusdel, in Cederberg municipality, where two members of a farmworkers’ forum were meeting with municipality officials over the lack of water on their farm. Petrus, the chairperson of the forum – which has The Right to Agrarian Reform for Food Sovereignty Campaign – was there, along with other SPP employees, to advocate on behalf of Wilhelm, a small-scale farmer, who does not have access to enough water to keep his farm viable.

After the meeting (hopefully Wilhem will have water by Monday, today), Wilhelm took us to his farm to show us the conditions he was facing. All of these small-scale farmers are working land that is owned by white farm owners. And these white owners are not ensuring that there is adequate water for the farmers. Additionally, South Africa has one of the most advanced constitutions in the world. However, this does not mean that the rights outlined in the Constitution are upheld. The right to an acceptable standard of living is enumerated in the South African Constitution, as is the right of access to water.  After seeing Wilhelm’s farm, it was clear that the government did not uphold this right, and was obviously also not being held accountable.

Wilhelm showing us the seriously low water supply on the farm

We travelled on to a second farm, where we met Gert. Gert is part of a seasonal workers’ union. It is a women’s union, called Sikhula Sonke; this means that men can be part of the union, but they cannot take a leadership role. All of the farmers we met on Friday talked about the importance they place on not using fertilizers or other types of poisons. However, they obviously have no control if the white farm owner chooses to fertilize other parts of the farm. This happened to Gert. There are citrus trees right beside his house and his plot of farming land, and these were recently fertilized by the land owner. His 3-month old daughter was in hospital, and Gert believed it was because of complications caused after these fertilizers were sprayed.

Gert took us to his vegetable garden and proudly showed us the different crops he was growing. Right now, he grows just enough to support his family, but he hopes to expand his farm so that he can also make some profit by selling produce in the market.

A kinda grainy photo of Caroline, Katherine, and I with Gert and Petrus

Petrus then took us to his farm, where we finally met some women farmers. Petrus’s work as chairperson of the Forum is a volunteer position, making his wife, who farms the land, the breadwinner of the family. This situation, however, illustrates the sexism that is still rampant in South Africa (and elsewhere around the world). If Petrus was farming the land, the farm owner would have provided a toilet for him. But because it is a woman who is farming the land, there was no toilet. Petrus had to construct a makeshift toilet for his wife, because of this, and he said that he hopes to make it nicer in the future.

Petrus also took us to the back of his farm, to see the pigpens. Many of the pigs seemed pretty interested in us. Methinks they just thought we had food.

As it was getting late in the afternoon, we then drove south back to Cape Town, traveling to a plot of land that’s been occupied by farmers for 27 years. There are approximately 300 people who live there. Land is often occupied by people who want to live on it, but rarely by those who want to farm it (some of the farmers live there, but some do not; some also just leave one person there at night to guard the farm). As the land there is not that fertile, the farms are mainly animal farms. We saw pigs, cows, geese, chickens, and goats.

At the Occupy site, we met Patrick and Rosaline of Itemba (“Hope”) Progressive Farmers. They explained why and how they were occupying the land. In South Africa, the law says that if someone constructs a structure on a piece of land that they are occupying, and it remains there for 48 hours, the government then has the responsibility, if it wants to evict the tenants, to find alternative accommodation for them. The government is currently in talks with the farmers there to move them to other, better land.

Some people will be left behind. Because the land is not their land, they have no say in who can live or farm there with them. And some pedophiles and criminals have latched on to the site. But since they are not part of the association of Itemba Progressive Farmers, they will not be part of the group that is moved to the other site. Patrick also told us that there were a couple of farmers who had jobs outside of that farm, some making more than $60,000 a year. It was unclear why they were also occupying the land.

We visited several farmers’ plots, and met both male and female farmers who had been farming the land for various lengths of time.

One of the “occupied” farms

After having visited Occupy Calgary and Occupy London over the past 2 weeks, it was really interesting to see this other type of Occupy movement. It truly felt like an example of the 99% confronting the 1%. 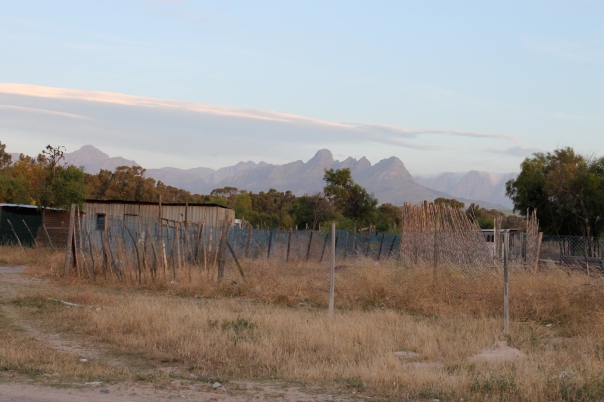 This farmer has been here for 27 years 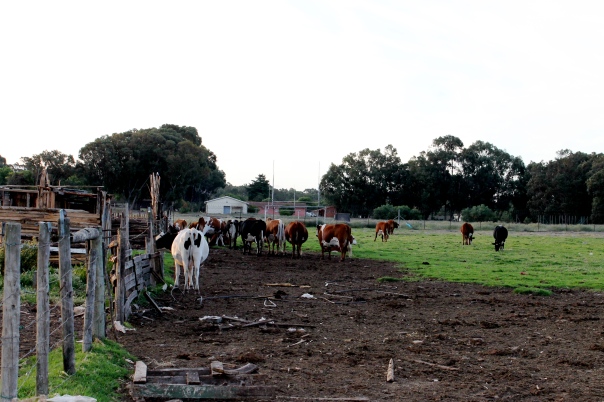 Cows belonging to the same farmer

Caroline and I went back to our B&B for our last evening in Cape Town, getting ready for the work we’d have to do in Durban!

Posted on November 28, 2011, in South Africa. Bookmark the permalink. 3 Comments.