← Conquering Sigiriya: A Photo Essay
Fine, But Just ONE Photo →

I love me some temples. Give me a Hindu, Jain, Sikh, Buddhist, or Ba’hai temple, and I’m happy. They’re just so beautiful, and this part of the world is rife with them!

My first foray into the world of temples was just over a week into this adventure, when I crossed the border from Pakistan and headed to Amritsar, India to see the Golden Temple – the holiest place of the Sikh religion. 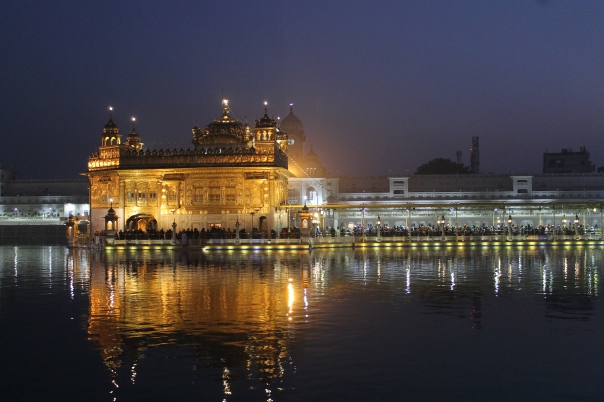 The gorgeous Golden Temple in Amritsar

As you walk around the outskirts of the temple, there’s a building with rows of doors, each doorway leading to an alcove where a custodian (Sikhism doesn’t have priests) reads from the holy book, the Guru Granth Sahib. It’s like a holy version of Amsterdam’s Red Light District, I somewhat blasphemously thought.

An example of Hindu architecture

As I travelled south, further into the heart of India, I began to experience the gorgeous architecture of Hindu temples. Some can be quite simple shrines to a god or goddess, while others are magnificent affairs, with towers reaching up to the heavens resplendent with images of gods, goddesses, demons, and monsters.

I’ve been told there are more than 300 million gods and goddesses in the Hindu religion, and that no one can recite them all. (I’m not sure if this is because it would take too long to actually name them all, or if there physically is no comprehensive list anywhere in the world.

I think they’re doing something dirty…

Sometimes the sculpture reliefs adorning the temples can be a tad naughty! (I sadly never made it to the Khajuraho temples – that’s for next time – but I did still see a few examples.

And while I do love the temples, I have come across some wayward “priests” who seem to have forgotten the true meaning of their respective religions. For example, in Ranakpur Jain Temple, a priest came up to me while I was listening to the audioguide (which was coincidentally in the process of telling me how Jainism is about letting go of materialism, consumerism, etc) and asked if he could pray for me. I never say no to someone who wants to pray for me – unless they’re trying to pray away the gay, but that’s another story – so I said yes but then I had a thought. Perhaps it was my Catholic upbringing nagging at me with the memory of the historical practice of selling indulgences. 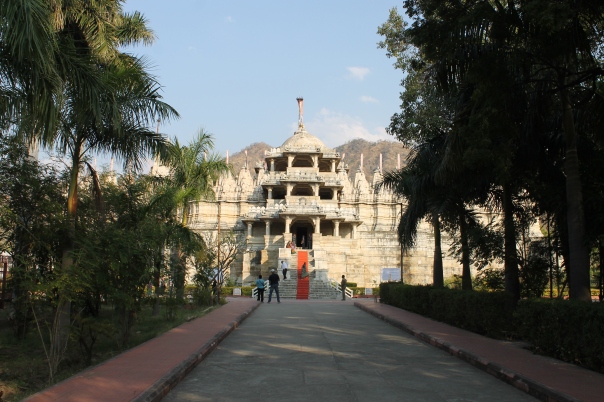 So before he started, I said, “Oh, but I don’t have any rupees.” He paused, and then gestured around to the other tourists nearby saying, “Well maybe your friends do…” Smelling a rat, I said, “No, none of us have any rupees.” And with that he turned around and walked away without a word.

Seriously?!? I thought. You’re a priest. You’re supposed to be doing God’s work, but you’ll only do it for money?

Monkeys populate the areas around many temples. Don’t be conned by their cute faces; they can be evil. I’m not even kidding.

Another time, in Pushkar at one of the few temples devoted to the Hindu god Brahma, a supposed priest at the temple began guiding us around. We told him we had no money with us right at the start, repeatedly, but he just kept saying. “No problem, no problem.”

Standing with Shiva the Destroyer at Kailasanatha Temple in Ellora

Of course, once he’d finished showing us around he proceeded to ask for money. But not just “a donation of our choosing” – more specifically like 500 ($10) or 1000 ($20) rupees. We said no – especially as he wanted us to give it to him personally and not put it in the designated donation boxes for the temple, which is what we were planning to do and told him we would do. So he started berating us, saying we were bad people, etc, etc. It was highly unpleasant and left a bad taste in my mouth. Again, is this what real religion is supposed to be about??

The Lotus Temple in New Delhi – a Ba’hai temple

But it’s not all like that. While someone hanging around the temple who tries to enthusiastically show you around should be viewed with suspicion, there have been times I’ve struck up conversations with fellow visitors – both foreign and local – to the temple and had a lovely time exploring with them. And often swearing under our breathes as we run across the scorching hot tiled floors in our bare feet!! 🙂

I enjoyed hanging out with some fellow buxom babes in Ellora

But it’s almost always worth it! 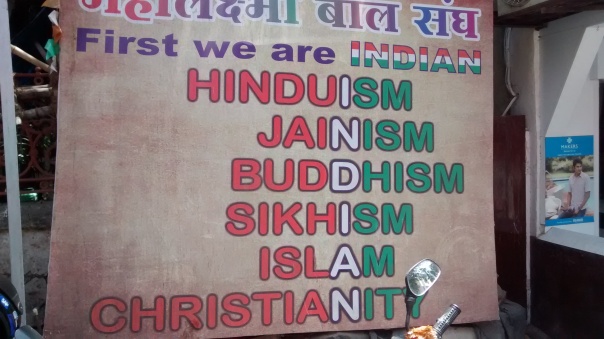 Next Up in the “India Explained through Book Titles” series:
Fine, But Just ONE Photo
Subtitle: In Which I’m Handed a Small Child

← Conquering Sigiriya: A Photo Essay
Fine, But Just ONE Photo →