← Becoming Aware of My Ableism
Venturing into New Writing Genres →

I got published!! It’s been such a crazy adventure trying to get this piece out, but it finally happened in late July. And I just realized I never wrote a blog piece about it. So here we go!

Last Fall, I took a writing course at Ryerson University with the amazing Carla Lucchetta (check out her writing) where I wrote a pitch letter for this piece, as well as a first draft. Just before Christmas, I pitched a story on LGBTQ rights in Zambia to Daily Xtra, and just after the new year, they accepted it! But then there were delays with editing, then my editor left for another publication, etc, etc. But now I’m finally published!!

I’d visited Zambia the previous summer, and also travelled through Namibia, Botswana, and Zimbabwe. While in Zambia – a country, like many in sub-Saharan Africa, where homosexuality is illegal – I interviewed Juliet Mphande, the Executive Director of LGBTQ organization Friends of Rainka. These were my original opening two paragraphs, for the writing class:

In Zambia, a landlocked country in southern Africa, Juliet Mphande leads an LGBTQ organization, Friends of Rainka, which aims to advance, promote, and protect the human rights of sexual minorities. It’s a difficult place to be doing that kind of advocacy. A 2010 study showed that 98% of Zambians find homosexuality intolerable compared with 11% of Ugandans who do find it tolerable. It is within this context that I arrange to meet Juliet at a Lusaka location that won’t bring too much unwanted attention to either of us. As I search for someone who could be her on the open-air patio of the restaurant we’ve chosen, a recent front page headline in Zambia’s daily national newspaper swirls in the back of my mind: “Cage Filthy Homos….they are worse than dogs.” This is not a place to be openly gay, even for a white, blonde Canadian like me. Finally, I spot a solitary woman at a booth just inside the restaurant. I join her, and we begin to discuss the reason I am there – to learn more about the situation of LGBTQ people in the country. “Enough is enough,” Juliet begins.

It’s summer 2013, and this is the first time I’ve considered myself an “unwanted tourist.” I am travelling through a country, as an openly gay person, where homosexuality is illegal. I’d been to other countries, also on the African continent, with jail sentences for the “crime” of homosexuality, but I wasn’t yet out – to myself, or to anyone else. Back then, I had an acceptable level of contempt for the laws of the countries where I travelled, but that was it. I didn’t have to think about my own personal safety. While I was incensed by other people viewing my friends as being “sinners” or less deserving of human rights, I now felt a new level of hurt, when that hatred and prejudice were directed at me. 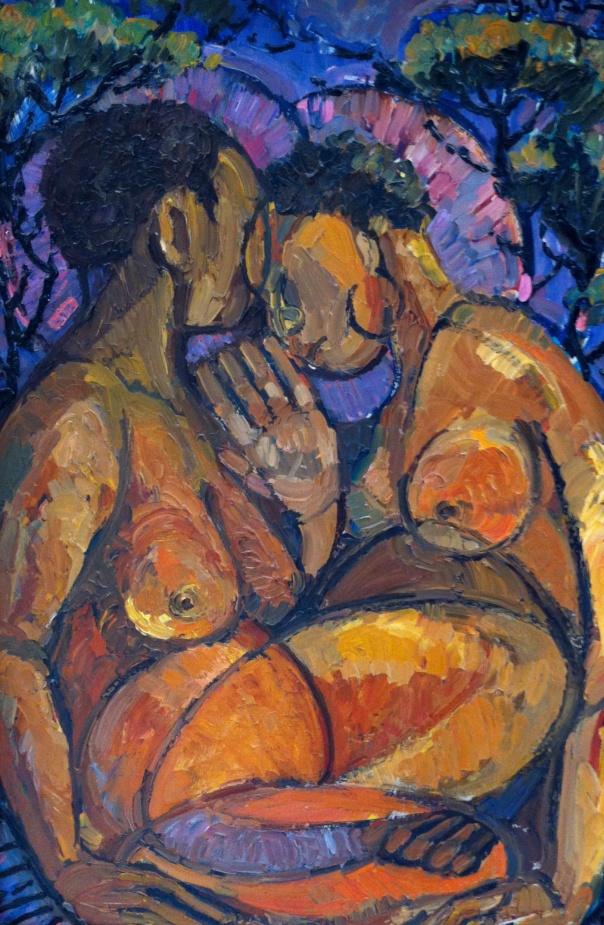 A painting in the Lusaka national museum. I don’t know about you….but it appears to be depicting lesbian activity (which would technically be illegal). I think it’s beautiful.

It was a very surreal experience travelling through four countries where I knew I wouldn’t be allowed to live and truly be myself. Where I knew that people like me were struggling to live their lives in fear and hiding. There were glimpses of these lives as I wandered along my trip. I brought a Canadian LGBTQ flag with me, and took a photo of it in every country I was in – my own little act of rebellion. Then there were the other gay and lesbian travellers I’d subtly suss out and warm up to, like the woman who worked for MSF who spoke to me about being gay and working for an international organization in countries where homosexual acts are illegal. There was the book I stumbled across in the national museum in Lusaka about sexuality in Zambia, with its three paragraphs on homosexuality. It described how women in America “chose” to be lesbians because of fear of contracting HIV/AIDS.

And finally, I met with Juliet Mphande.

And the final result of all this travel and exploration? My very first commissioned – and paid – piece published in Xtra on July 26, 2014, entitled Zambia’s Pervasive Homophobia. Hope you like it! The ending is one of my favourite parts:

I ask if she’s afraid and mention David Kato, a well-known gay rights activist in Uganda who was murdered in 2011. Mphande appears unfazed. “It’s not a job; it’s who I am,” she says. “The worst thing that could happen is to not be an activist.”

Shortly after I got back from my trip through southern Africa, I was killing time at the Indigo at Yonge and Eglinton before meeting a friend for dinner. There, just before I left the store, there was a table lined with books for Gay Pride. “Wow,” I thought. “I’m home.”

Posted on October 12, 2014, in LGBTQ, Writing. Bookmark the permalink. Leave a comment.

← Becoming Aware of My Ableism
Venturing into New Writing Genres →