← Wandering Around the COP
Resolution?? →

It Ain’t Easy Being Canadian 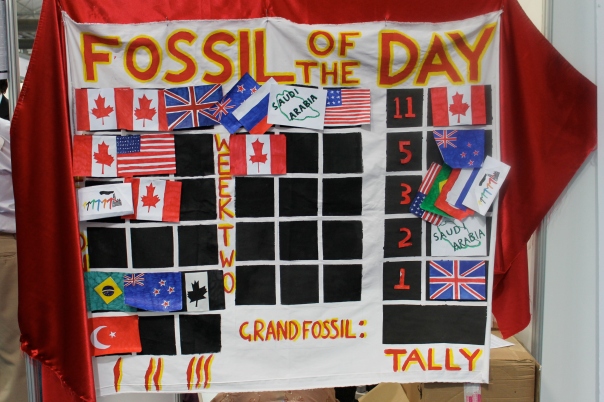 Anyone want to guess who gets the distinction of Grand Fossil? (This is from yesterday, when Canada had 11 awards)

Then, when I was in the plenary, I was surprised, and seriously amused and delighted, by the action of 6 youth in the Canadian Youth Delegation who stood up in silent protest, with t-shirts that had on the front “People Before Polluters” and on the back “Turn Your Back on Canada.” 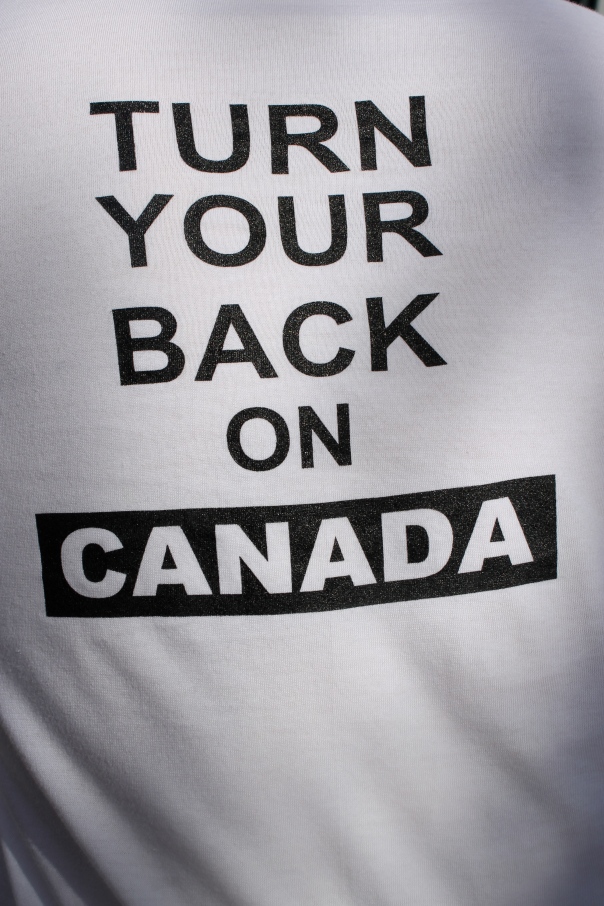 For shame, Canada. For shame.

Of  course, this peaceful, silent protest was a security risk and they had to be ushered out. All they did was stand. It was the most effective protest I’ve ever seen, and one that made the security officers, and COP 17 officials, seem even more ridiculous. Check out the video of Kent’s speech below. At about the 3.30 minute mark, you’ll here a round of applause – listen to how long it is! And it was much louder from where I was standing; you couldn’t even hear Kent. That’s for these amazing youth.

As soon as they stood up, and I was just behind them in the back corner, everyone around started taking photos (and hopefully someone got some video). I also took photos of them being led out, and was yelled at by the security guard to stop filming them. They were taken out a back exit, and then when I went to get back to my laptop, I was stopped by another security guard until I showed him my computer. Craziness. 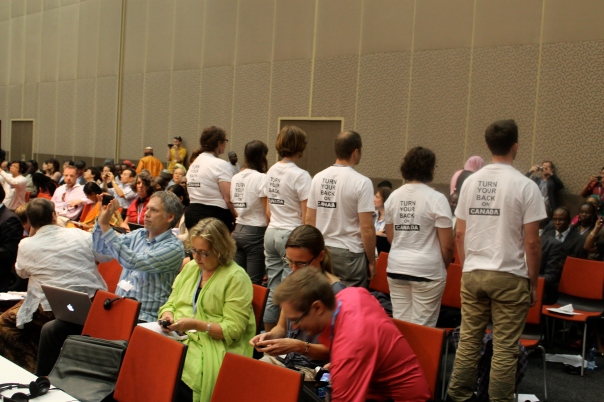 Taking a stand! (Elizabeth May in green at the front)

The six youth being escorted out. Second from the right is Brigette DePape (the “Rogue Page”). Peter Kent is onscreen in the background.

General Secretary of the Mennonite Church in Canada, Rev. Willard Metzger, wrote a great blog about yesterday. Additionally, Moderator Mardi Tindal’s excellent blog post is getting some publicity on Canadian social media sites, particularly Twitter. The Globe and Mail reported it yesterday, and today they have an article an about Kent apparently changing tack and seeking a binding climate treaty by 2015. There was another article about the youth here. And to hear about it in the 6 youths’ own words, read about it here or listen to a podcast here.

Hear Cam Fenton of the Canadian Youth Delegation speaking after six of its members (he wasn’t one of them; they strategized to make sure he keeps his accreditation) were thrown out of COP17:

After meeting up with Caroline for some lunch, we ran into some of the youth from the Canadian Youth Delegation, including  the six youth who participated in the protest. They told us that, after they were escorted out, they were grilled with questions for about 10 minutes, with the security guards asking them who they were, what organization they were with, who their leader was, etc. They just kept quiet, and were eventually escorted out via the security exit and had their accreditation revoked.

Me and Caroline, in solidarity with the Canadian Youth Delegation

Later on, we came across one of the signs I’ve mentioned previously, depicting Stephen Harper. Of course, I had to get a picture with it!

Me in my I (heart) KP (Kyoto Protocol) shirt. I wore it to yesterday’s plenary and today’s briefing

Then this morning, I skipped out of the Youth for Eco-Justice program briefly to attend one of the daily briefings with Guy Saint-Jacques, Canada’s Chief Negotiator and Climate Change Ambassador. The sessions are meant to provide information on the status of the COP 17 negotiations to interested Canadians accredited as observers to the UNFCCC (comme moi).

I don’t want to go all conspiracy theory on you readers, but it was a bit odd that for this briefing, the day after the infamous protest, the time suddenly changed from 8:30 am to 8:00 am, and then later the rooms were also changed. It took me awhile to find the actual room, since I had to find the first room in the huge ICC complex (the room was empty and the media guy told me the Canadian briefing was happening there at 8:30, so I’m not sure why the room had to be changed), and then the correct one, and there was also a group of people who arrived right at the end of the briefing, at 8:30, who obviously hadn’t gotten the message. But there was a small note on the door to the first room, so maybe it wasn’t a conspiracy after all. 🙂

Anyway, this briefing, I was told, was one of the most exciting briefings yet. When it was time for questions, all of them displayed frustration and disappointment with Canada’s position. One youth (I’m assuming from the Canadian Youth Delegation) asked the ambassador, “Can you look me in the eye and tell me you’re negotiating in good faith on behalf of my generation and not [on behalf of] the tar sands oil companies?” Guy Saint-Jacques responded, and the youth repeated his question, which is when Paul Booth, Deputy Minister of Environment Canada, and said “I’m looking you in the eye and…”

And four youth stood up, one even tipping his chair over, and stormed out of the room. While it was exciting, and it made their point, it also sent the message that “we can’t talk to you.” And as Moderator Mardi Tindal said, “Pragmatically, we need to find a way forward. We need to listen to each other long and hard enough, listen intently enough, to find a way forward because we can do nothing less.” To read about additional conversation between these youth and Paul Booth, click here.

Then, later today (and I wasn’t present for this, unfortunately), an American youth, Abigail Borah, was ejected from the plenary. Willard Metzger writes about it here and the New York Times describes the scene here. And if you’re on Facebook, check out the set of photos here. And here’s a short video clip of it happening:

Seriously, when will our leaders and negotiators get it? And why does it seem like it’s only the youth who give a damn? Or is it only because we have less to lose by getting thrown out, and more to lose by not taking a stand?

← Wandering Around the COP
Resolution?? →